abstract：The two-flange connection from input to output is an important part of the cross shaft universal coupling, which is directly related to the reliability of the entire transmission chain and the performance and life of each component in the transmission chain, and users tend to ignore or misunderstand this The authenticity and importance of the problem. The following will comprehensively analyze several typical flange connection types and related factors.

One. Comparison of flange connection type and performance

1.Comprehensive Analysis of the Connection Types of End-face Keys with Ordinary Bolt Groups

In the past, limited by the backward manufacturing level, the flange connection type with end face keyed with ordinary bolt group (see Figure 1) is easier to manufacture, but has many disadvantages

2.Comprehensive Analysis of the Connection Type of Face Gear with Ordinary Bolt Group 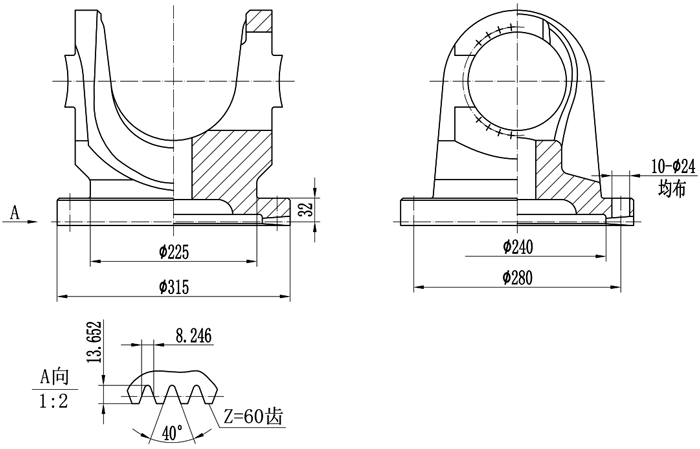 Although it looks like a tall and exotic product at first glance, there are also many shortcomings. In addition to the high manufacturing difficulty and cost, because the pressure angle of the end tooth profile reaches 20°, the ordinary bolt group increases a lot of extra pulling force during heavy load operation, which is likely to cause the bolt group to fail. Other disadvantages are similar to the end face key connection type. Nowadays, manufacturers choose this connection type less and less, and it is a connection type that cannot be used if it is not used well.

3.Comprehensive Analysis of the Connection Type of Reamed Hole with Bolt Set for Reamed Hole

In the past, due to the backward traditional processing conditions, the reaming method of flange was drilling and reaming, which made the interchangeability poor and the market promotion difficult. But with the popularity of CNC machine tools, the problem of interchangeability has been completely solved. At present, the interchangeability of products produced by different manufacturers in different batches can meet the requirements. Through the optimization design of Yueqing Sanfeng transmission, more and smaller olive shaped reaming bolts (see Fig. 5) are selected to expand the diameter of bolt hole distribution circle, so that the force is better. At the same time, the diameter of flange fork neck can be increased (see Fig. 4, φ 240). The flange end face is completely undamaged due to no keyway, unlike other connection types, so the flange fork is damaged The results show that the strength and rigidity of the bearing head are obviously improved, and the comprehensive use effect is good, especially for the products with high-speed dynamic balance requirements. The overall performance and bearing service life are increased by more than 20% compared with other connection types. At the same time, the connection type is easier to install, and the suitable wrench can be used to pre tighten the bolt group in place easily and flexibly.

T =101.76 kN·m（Because the shear strength is much greater than the compression strength, it is calculated according to

（2）The friction force is generated after the ordinary bolt group is pre-tightened, and the torque is calculated:

The maximum friction force generated after the ordinary bolt group is pre-tightened, the calculated torque:

（1）Calculate the torque according to the allowable shear strength of the bolt group pin rod for reaming holes:

Calculation of allowable shear stress of bolts: τ=σs/n is calculated according to the shear limit (n=3.8 in the formula),

（2）Calculate the torque according to the allowable extrusion strength of the bolt group pin rod for reaming holes: (calculated

according to the weakest material)

T=402.47 kN·m (Because the extrusion strength is much greater than the shear strength, it is calculated according to

Note: 1. The mechanical properties of the bolt group should meet the requirements of GB/T3098.

4. The pre-tightening torque of the bolt group is organized and edited according to the relevant mechanical design manual

After the two flanges are connected, when there is no relative displacement between the flanges during long-term heavy load and frequent forward and reverse operation, the various methods that have been statically tested above are used, and they are not easy to loosen and fail.

Five. To sum up

Based on the comparative analysis of the contents of the above pages, in addition to the excellent performance of the cross shaft universal coupling, the overall quality of the flange connection is also very important. How to achieve high reliability of flange connection, longer product operating life, more convenient manufacturing and use, the choice of reaming holes and reaming holes with bolt group connection type has obvious advantages, and now foreign manufacturers have used a lot of similar products. After Yueqing Mitutoyo's transmission technology is optimized, the overall performance of the product will be more ideal, which will be of great significance to the operating reliability and life of the cross-shaft universal coupling.